Sorry, this entry is only available in Ελληνικά. 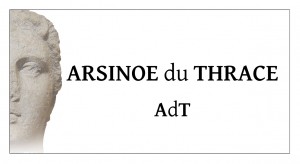 This year the ECONOMIC FORUM OF THRACE presents its first collection named AdT, i.e. the initials of the first empress of Thrace and Asia Minor Arsinoe de Thrace.

The fashion show will take place in in the sanctuary of Samothrace, which is embedded in the ancient ruins. The holy city will serve as the scene for the first fashion show since 385 b.c.

Our guiding principal is that…

…we are assertive, self-confident and brave. We stand up for our beliefs. We are sometimes bold, but always peaceful.  It doesn’t matter in which dimension or time you are at the moment- ENJOY  life and the beauty of it!…

Its our  great  pleasure  to  present  magnificent  silk   creations  from Soufli /Greece. We put our ideas into beautiful smooth cocoons of immortal silk of Soufli  where the magic of every time, every sphere and every earth-color is captured.

represents the fight for freedom – colors of ancient Greece dominate

*A special thanks for the organization of this event goes to:

” The photoshooting of the Collection “AdT” “

Some scholars say the adage: red string tied to a spinning wheel, kick it to roll, so as to start a tale. Our tale takes place to the industrial area of “Tzivre”, a factory that dominates Soufli for about a century.

So the occasion for this silky story is Arsinoe. The Tzivre acquires again its glam through the camera lens, by capturing exquisite silk creations. 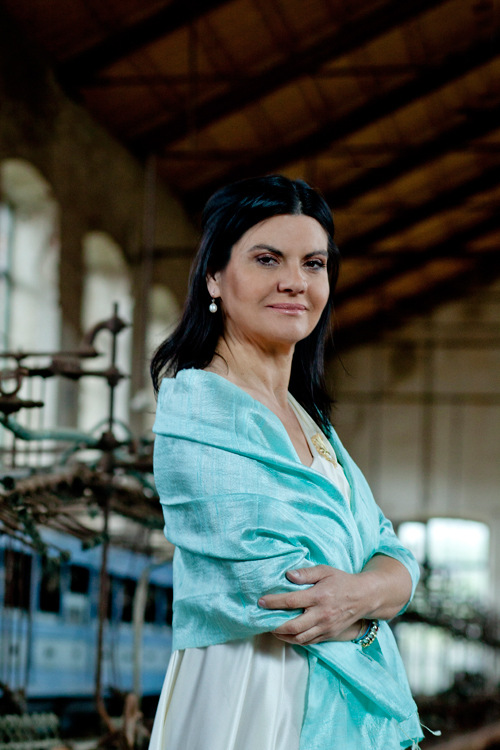 …we are assertive, self-confident and brave. We stand up for our beliefs. We are sometimes bold, but always peaceful. It doesn’t matter in which dimension or time you are at the moment- ENJOY life and the beauty of it!...

So, at the area of the respoolling made by the Tzivre brothers, where 100 silk-workers once worked, we see an ethereal being clothed with an ancient turquoise silk crepe dress. This vision among 54 electric spool engines fills us with admiration because a silk fiber is transformed into a masterpiece. 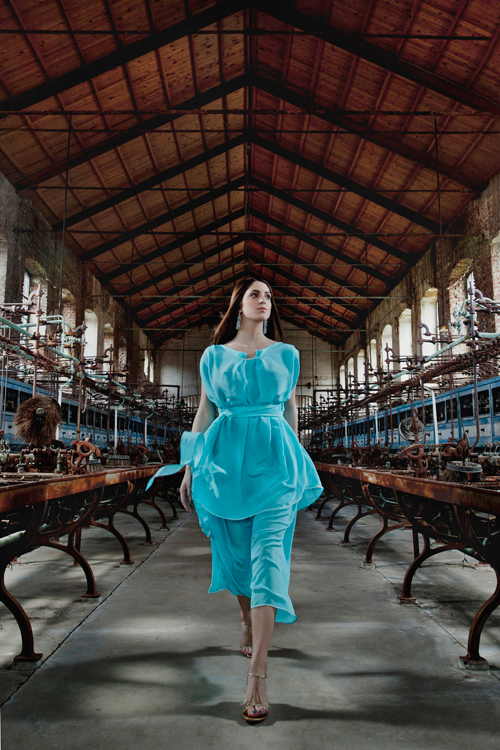 At the same time, the silk-room comes to life with the manual respooling device only by the sight of a muse among the rollers wearing a yellow-green silk dress. 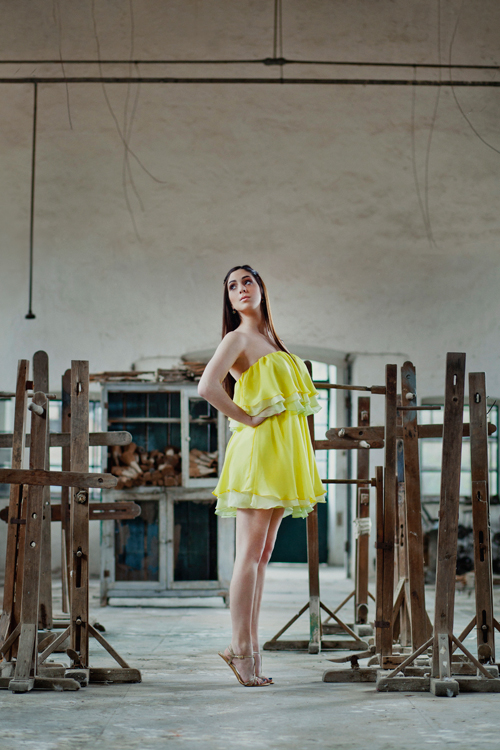 The dream does not end yet. Among the wooden baskets for the cocoons and the stools where the silk-workers were sitting there is a woman figure that glows dressed in a beige silk satin creation. 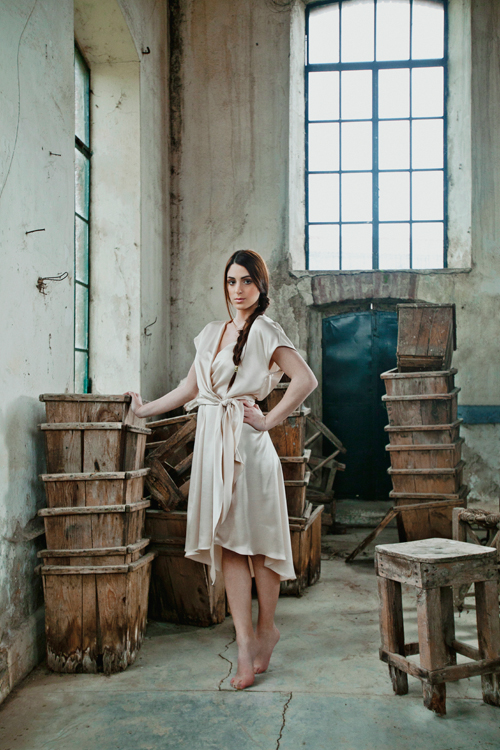 And suddenly at the burner area, where only men worked, we could say that we meet the shape of Arsinoe, dressed in a beige silk dress with her hair waving by the silky air of Soufli. 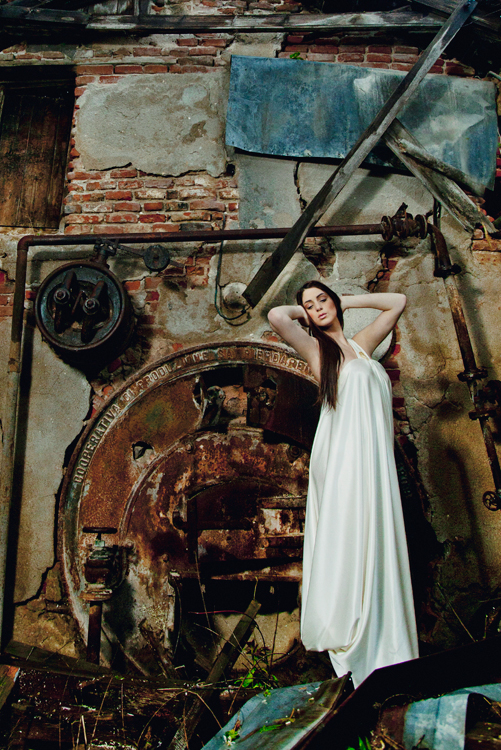 And like most stories have a happy ending so in Tzivre the lights go out. But its glow and history continue to radiate stimulating emotion to the silk-workers who once gave the breath of life in this place with their laughter, their work  and their admiration for silk garments that are still created by the Silk of Soufli.

On the 22nd, 23rd & 24th of June 2012, in the conference center “Thraki Palace” in Alexandroupolis, Greece, will take place the 3rd Financial  Conference in Thrace, with a cultural background, organized by the Economic Forum of  Thrace.

The Conference is held under the auspices of the Greek Ministry of Development and Competitiveness & Shipping. Major sponsor of the event is the pharmaceutical industry “Pharmathen Pharmaceuticals”.

The Conference’s theme is: “Crisis in Greece – Development in Thrace. Special Economic Zones. ”

On June 22 will take place the opening of the 3rd Financial Conference in Thrace with cultural background, with a classical music concert, organized by the Economic Forum of Thrace   and the Conservatory “Phaeton.” The award-winning pianist and conductor Thanasis Trikoupis and the soprano Antonia Kalogirou, which has won the first prize in the “Maria Callas” competition, will perform songs that have their roots in the north-European history and will charm us with their notes.

On June 23 will take place the interactive part of the event, where important personalities from around the world will express their opinion on the Greek crisis and suggest ways to overcome it starting from Thrace. Politicians, economists, businessmen, journalists and artists will proceed to a democratic dialogue in order to help us realize the situation we are all in and see the opportunities for growth and progress that must be seized.

On June 24 a fashion show will be presented, organized also by the Economic Forum of Thrace. The dresses that will be presented to the show belong to the clothing line owned by the Economic Forum of Thrace under the name «Arsinoe de Thrace – AdT» and are exclusively made ​​of Thracian silk. Since the creations are inspired, yet dedicated to the ancient history of the island and  Soufli, clothes are of a Hellenistic nature. The silk is very light and swirls around the female body, a clear memory of Arsinoe du Thrace (316-270 BC, Queen of Thrace). The Economic Forum of Thrace expresses its admiration to the personality of Arsinoe in the banner of his clothing collection, since it bears the name of the Empress: «AdT».

The Cabeiri Mysteries of Samothrace.

Information about the Silk Fabric

“Casus Belli 2012”, we present to you the best Silk worlwide from Soufli, Greece.

by Katerina Karajanni, President of the Economic Forum of Thrace.

In our first event in 2009 we promised to ourselves and friends of our country, that Thrace, the oldest civilization of Europe will become the growth engine of Greece. We found the road, we are walking on it steadily and disciplined, logical without being disoriented by anything that promises easy solutions. It should be understood that only the long-term development is effective. And that requires hard work by everyone. 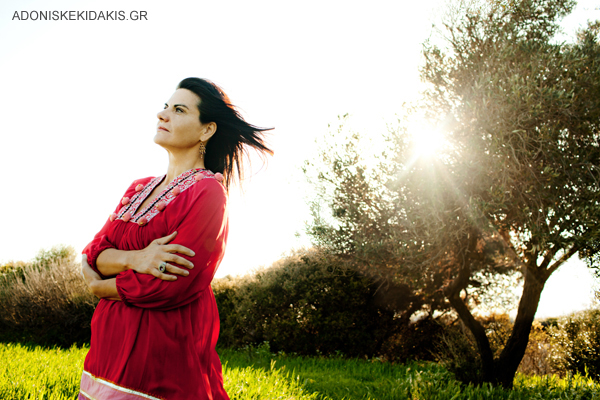 I have wandered several times in the past to the urban streets of Soufli. Soufli, the once productive and unrivaled in the production of silk, has dressed emperors, kings and nobles. Nowadays, this wonderful gift of nature is degraded and sold on the fringes of the street to the few tourists.

END_OF_DOCUMENT_TOKEN_TO_BE_REPLACED

Alexandroupolis, a town between East and West.

Alexandroupolis, a city between East and West. 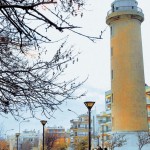 Written by Antonis Telopoulos for the newspaper ethnos

Alexandroupolis , the capital of Evros changes through the prism of seeing it. Geographically it is a strategic location, with a perfect street planning, socially vibrant and an important commercial port. A city that maintains the sober profile, despite its peculiarities related to the various extensions of the remote status.

First part
It all began when a Muslim monk named Dede decided to rest under an oak.

END_OF_DOCUMENT_TOKEN_TO_BE_REPLACED

The interview of Ms. Katerina Karajanni on “imerisiaonline” digital newspaper about the Special Economic Zone (S.E.Z.) in Thrace 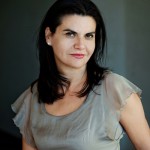